Role - What is Min Sun-mi’s role in your story?

Other names - What other aliases does Min Sun-mi go by?

Gender - What is Min Sun-mi’s gender?

face Looks
Weight - How much does Min Sun-mi weigh?

Height - How tall is Min Sun-mi?

White with a bright blue fade

Hair Style - How does Min Sun-mi style their hair?

Facial Hair - What facial hair does Min Sun-mi have?

(Admin: No idea, as she was created in Gacha)

Identifying Marks - What identifying marks does Min Sun-mi have?

None, for actual marks.

fingerprint Nature
Mannerisms - What mannerisms does Min Sun-mi have?

When angry, Sun-mi will growl and act on impulse rather than through a planned strategy.

When sad or upset, Sun-mi will bite her lip and fight back tears.

When worried, she will fake optimism to keep others from worrying.

Motivations - What motivates Min Sun-mi most?

To help people, to better the world, and her brother

Flaws - What flaws does Min Sun-mi have?

Sun-mi can be stubborn, and she tends to challenge herself, trying to better herself, but she tends to push her limits too far thanks to stubbornness.

She is somewhat overprotective, and emotions can control her, sometimes throwing all strategy in a fight out the window.

Prejudices - What prejudices does Min Sun-mi have?

Talents - What talents does Min Sun-mi have?

Hobbies - What hobbies does Min Sun-mi have?

Singing, drawing, also gaming, thanks to some of her friends, to name a few.

Sun-mi is a confident and determined person. She is proud of her abilities and strives to use them for good. She is an incredibly hard worker, as well, due to a strong desire to achieve her goals.

She is also a creative person, coming up with solutions and strategies for any situation, even if they are strange. She is sometimes very logical and clever as well.

She's sweet, optimistic, and caring as well. She can put a smile on anyone's face. She worries a lot deep down, but she tries to keep everyone positive.

Sun-mi is also very protective and sometimes impulsive. When she isn't pretending to have optimism for the sake of others in dire situations, she can be very emotional as well.

Possible anger issues, but not confirmed.

Sun-mi does not practice religion.

Politics - What politics does Min Sun-mi have?

Sun-mi does not have a political opinion.

Occupation - What is Min Sun-mi’s occupation?

Multiple shades of teal, some lighter and muted, some a bit darker and more vibrant.

Ice cream, anything with ice.

Her quirk, as it can create a variety of weapons

Sun-mi likes all felines, seeing as she's a neko, but she also loves dogs.

Job - What job does Min Sun-mi have?

Student at UA/hero in training in present day
Pro hero and co-founder of a hero agency in future.

Education - What is Min Sun-mi’s level of education?

Background - What is Min Sun-mi’s background?

Sun-mi grew up in a family of four, consisting of her parents and her older brother. Aside from her parents being busy saving people rather often, she lived a very happy childhood with her parents and brother.

From a young age, she was determined to become a pro hero like both of his parents. As soon as her quirk developed, she would use it daily, discovering what he could do and training with her brother.

Tae's determination and optimism inspired her, so she would train with him often. They would spend a lot of time together training and hanging out.

Due to how often the two would hang out, they grew close to each other. Tae would help Sun-mi and care for her when their parents weren't home, even if he was only three years older.

As the years passed, the two continued to train often. Tae was regarded as a potential top hero from the age of twelve, and he was known worldwide. As word spread to Japan, UA was interested, and once he was accepted, the family moved to Japan.

During Tae's years at UA, Sun-mi continued to train with him often. While it was more rigorous training due to her brother's aspirations of being a pro, she kept up quite well.

Upon graduating from UA, Tae quickly became a pro hero as his sister entered UA. He began saving others while his sister trained to do so. He was her main motivation throughout her life, so she was incredibly determined to be like him.

Pets - What pets does Min Sun-mi have?

She doesn't have any. 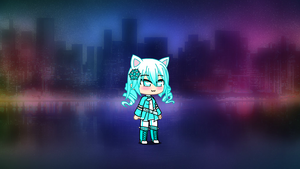 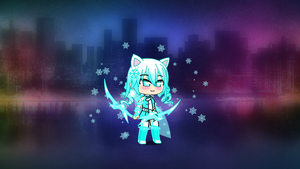 Both pics are from the beginning of her story

A quirk that grants cat-like abilities and ice powers.

A person with this quirk usually has cat ears, and they can sometimes have a tail. They can transform into a cat if they wish.

With this variant of the Neko quirk, a person with it can also use ice powers to create things that can only be broken by them, a person with a fire-based quirk, or extreme heat. Heat can also weaken them greatly.

This character was created by Shuichi on Notebook.ai.

See more from Shuichi
Create your own universe

This character is being shared on Notebook.ai by Shuichi.