Other names - What other aliases does Tomas Selvar go by?

Role - What is Tomas Selvar’s role in your story?

Gender - What is Tomas Selvar’s gender?

Scruffy dark hair along his jawline

Hair Style - How does Tomas Selvar style their hair?

Messy, but short. Not wavy or curly

Height - How tall is Tomas Selvar?

Identifying Marks - What identifying marks does Tomas Selvar have?

Sharp canines, which is typical for a werewolf
Scar on his left cheek
Multiple nicks and scars on his hands and arms
Long scar that runs perpendicular over the left side of his collarbone

White, with a light tan

Race - What is Tomas Selvar’s race?

fingerprint Nature
Flaws - What flaws does Tomas Selvar have?

So many
Little to no morals, and doesn't care if he kills innocents while killing his real target. Meaning, he sets an incendiary in a theater and kills everyone inside just to kill the one corrupt politician that was attending that night.
Stubborn, and doesn't like listening to other people about what they think he should do or how he should behave.

Is werewolf-ism a condition?
Sociopath?

Mannerisms - What mannerisms does Tomas Selvar have?

Fidgets with his dagger when he's bored, or taps the blade or against his teeth while staring at someone. Not quite an intimidation measure, but often comes across as one.
Taps his fingers against each other or against his knuckles when thinking.
Cocks his head when someone catches his interest, or when he's considering something.
Juts his chin out when he's feeling defensive in an argument

Motivations - What motivates Tomas Selvar most?

Tomas is a bit complicated, in terms of motivations. He is motivated by a displaced feeling of revenge, if that makes sense. Werewolves have been discriminated against by the mostly human government for years, and he considers himself a freedom fighter. He was kicked out of the real rebellion because he was too much of a radical for them, and ever since has been, quite literally, a lone wolf. He is, therefore, motivated by wanting to bring about justice and equality, but the way he does things is not quite a good way of doing so.

Prejudices - What prejudices does Tomas Selvar have?

Really doesn't care about normal humans, at all, which feeds into his not caring if innocents die. This does eventually change a little bit, but not much. Certain humans he cares about, but most of the time he doesn't care.
Definitely has a "i can do everything myself" sort of mentality, and believes he doesn't need anyone or anything else

Talents - What talents does Tomas Selvar have?

Killing people
Singing, actually. He has a surprisingly good singing voice
Planning
Surviving
Quite good with electronics (such as they are; the equivalent technology of his world is approximately mid to late 1800's)
Marksmanship

Hobbies - What hobbies does Tomas Selvar have?

Killing corrupt and racist (as in hating werewolves) humans. Is that a hobby? a talent? who tf knows at this point
Woodcarving (with the same fuckin knife that he kills people with so)

Either his knife/dagger, or his pistol. He has had both for years, and is an expert when it comes to wielding them

...his knife/dagger or his pistol. Or, later in the story, his wedding ring

Occupation - What is Tomas Selvar’s occupation?

Radical freedom fighter or serial killer and murderer. Depends on who you listen to

Politics - What politics does Tomas Selvar have?

A radical freedom fighter, man. Just...kills his political opponents, I guess?? His politics is he believes werewolves deserve equal rights and treatment under the law, but the way he accomplishes that is...Not Good.

Atheist, but wonders sometimes if there might be someone/something up there. Fate, perhaps?

Job - What job does Tomas Selvar have?

Background - What is Tomas Selvar’s background?

Education - What is Tomas Selvar’s level of education? 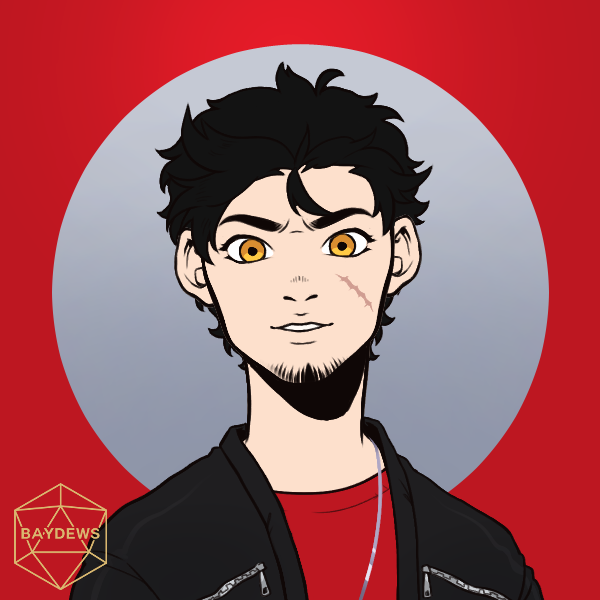 This character was created by Ice on Notebook.ai.

See more from Ice
Create your own universe

This character is being shared on Notebook.ai by Ice.