(I have a werewolf, but I’m not sure if it’s wise for me to join another rp)

(Ah, come on! You know we tell ourseleves "Just one more" and then we don't adhere to that.)

(Damn you… Okay, first, is there a plot to this? Because this werewolf of mine is unique)

(Innocent grin Basically, a bunch of shit happens to where 4 [or more, since some of us might have 2 werewolves] pack leaders packs get killed off. They form their own badass party 2 will probably end up together. One might end up dying along the way, but basically it's found family.)

(Ah. My werewolf is a full blown loner, an alpha [in more ways than one], and has severe trust issues)

(Then he'll probably be perfect for who I'll be putting in here! Grins)

(Hmm… maybe. Templates or no?)

Wolf Breed: Dire Timber Wolf?
—His wolf form is a massive black timber wolf that stands 5’ on all fours and is 7’ long. He has a huge, broad head with frighteningly beautiful icy blue eyes. He has a dark grey belly and a streak of dark grey marking either side of his neck.

(A pic of a timber wolf for reference) 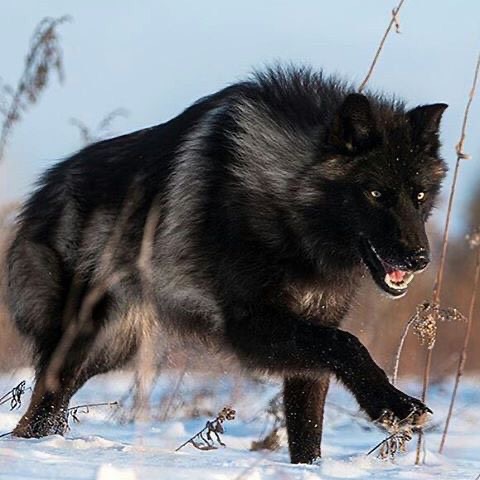 Appearance: 6’7”, 215 lbs. of muscle. Blue grey eyes that shine with intelligence and age, though they can turn to an icy blue when near a full moon. Long, straight, black hair with two white streaks, a thin one over his left ear, and a thicker one down the middle of his head. He also has a trimmed and squared goatee. He is white-skinned, has a slender/lean body, and appears to be in his thirties.

—He wears a blue nobleman’s outfit and has an old dagger and a worn woodcutter’s axe. He also has a blue roan mare named Eidna, but he occasionally stables her to wander on his own.

(Pics are from Heroforge)

(His clawed hand is more for reference, this way I don’t forget he’s a werewolf) 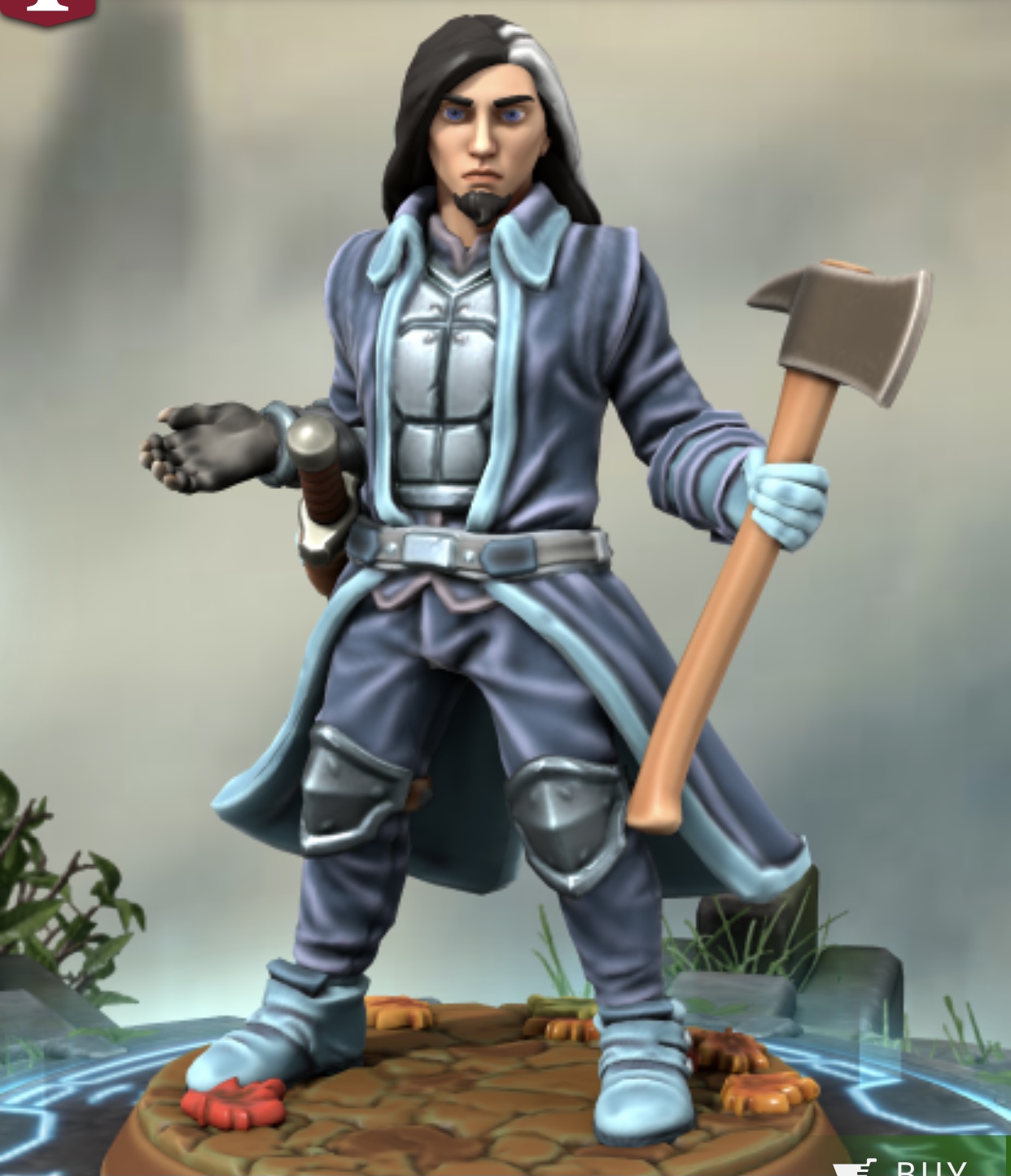 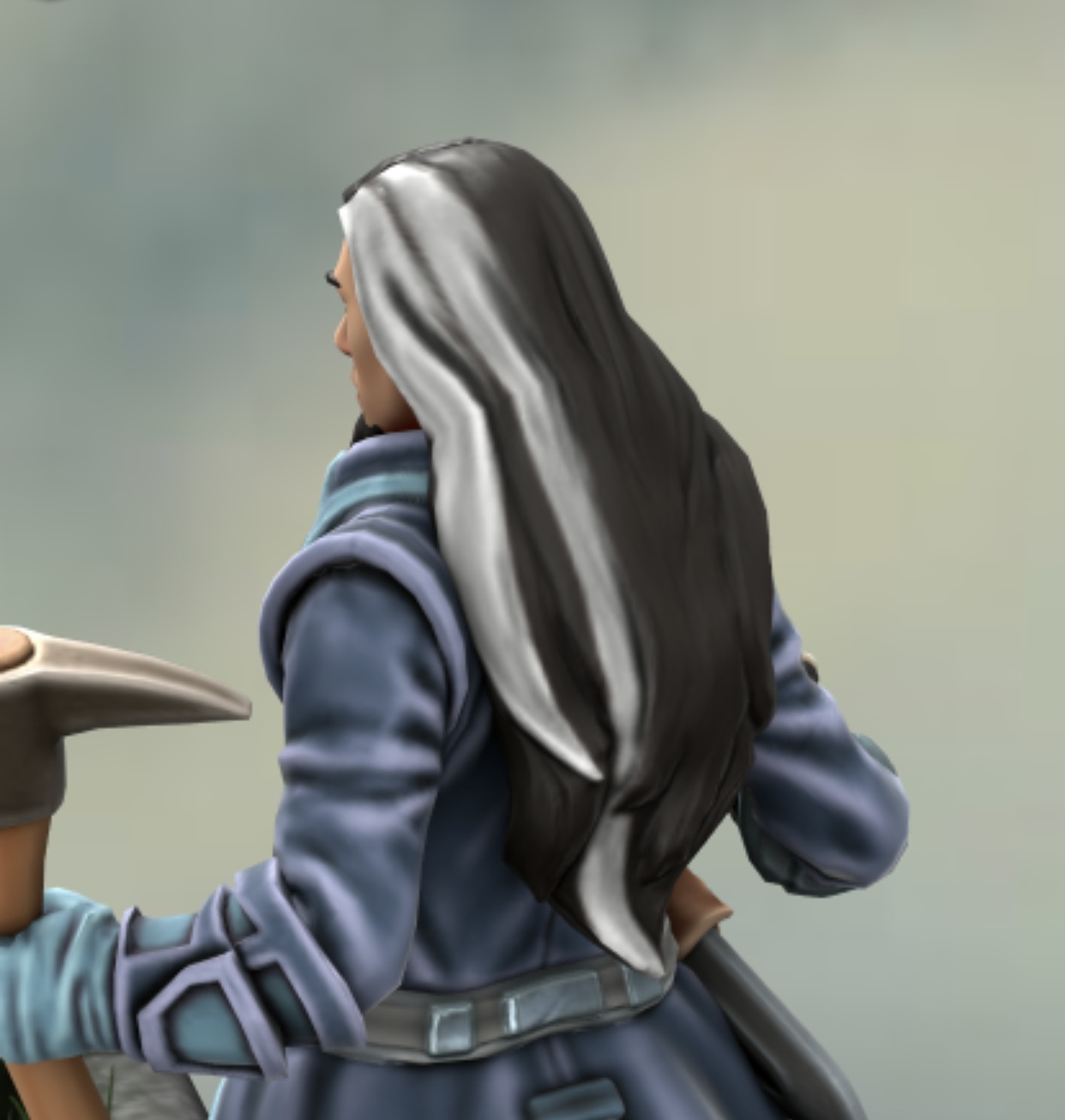 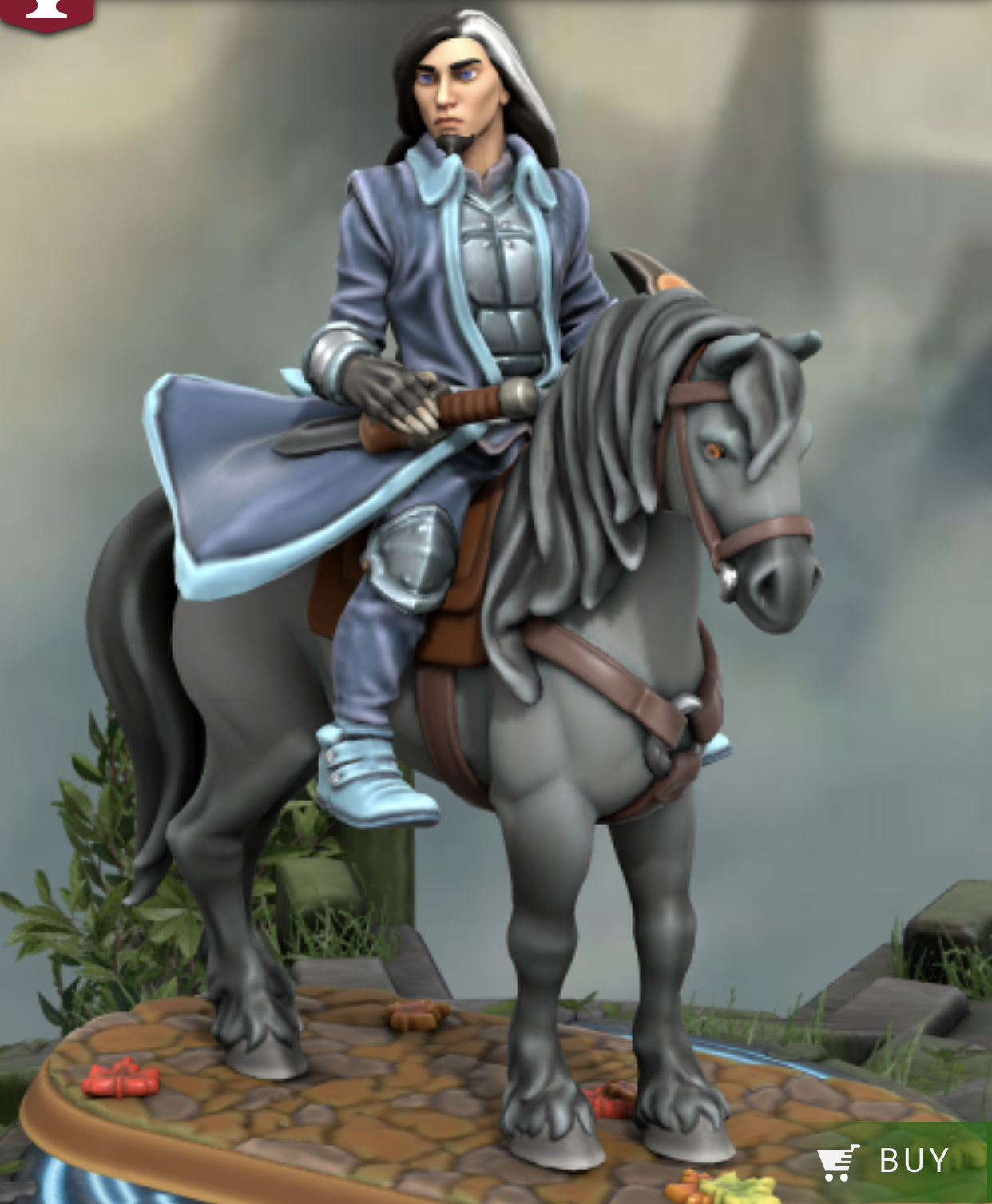 Personality: A jaded loner/wanderer. He’s aloof, a bit wild/feral, and generally unsociable, but he is usually polite to any passerby. He is a gentleman and an alpha (quite literally), but prefers a nomadic lifestyle. If angered, he has no qualms of being rude, or showing his beast side.

Powers/Abilities (Optional): He is much stronger and faster than most humans. He can partially morph, such as changing eye color or growing claws/fur, but this is usually painful (except the eye color change) and often involuntary. He is resistant to Wolf’s Bane, as his curse began with it and he had dealt with the agony for over a century before he managed to kill the witch and mellow out his curse. He is vulnerable to silver, and his skin will burn at the slightest touch of it (a damning sign of his curse).

—Swordsman, can ride a horse

Relationship?: Sure, if you can get him to trust you.

Other: Has no hybrid form.
—He is a Midnight Wolf (an ancient and powerful type of werewolf, supposedly said to have been pets of the gods, though many believe they are a myth and nothing more)
—Has a detailed backstory

(Does he work for this?)

Personality: A very tough, hardy individual, she takes no shit from anybody and lets people know that she isn't a weak or insignificant person. She's very prone to fits of surlyness, and has quite a temper that, when roused, leads to vicious fights.

Powers/Abilities (Optional): Ice magic is all she has.

Other: Hybrid and wolf form.

(Does he work for this?)

(Thx! It was the best image I could find, lmao. The wolf is her, and the human is also her, quite obviously.)

(Yup, thumbs-up. I use Heroforge a lot, lmao! And then research for other pics if need be)

(Shrug. It happens. I hope you can eventually get on it though. There’s a lot on it)

(Same here. I've heard only good things, so… shrugs back)

(Lol)
(And now the waiting game)

(Yup… actually, fuck that. Whom can we summon? One of the oldies?)