Anyone else playing yet?

No, but I want to play it. I've played the original version on the cube. Anyone else played that version?

No, I’ve played basically wild world and on.

I want to play so bad but I don't have a switch…
How good is the game? I want to know everything!!!

They also made tarantulas pretty common and I’m scared

Bleh… I have yet to meet a tarantula…

I know I've met a scorpion before… and been killed by one… but I really don't want to meet a tarantula….

I haven't met one yet
Where are they?

On the ground at night. They aren’t super common, but more so than in previous games. I encountered two just today.

They changed the seasonality of some bugs and fish for new horizons. They’re definitely out in April, given that you’re northern hemisphere

Oof… You sure it's only at night?
Also are the big money making beetles, (Golden Stag, Goliath Beetle, ect.) for New Leaf still existant in New Horizons? and are they still as valuable?

Yeah, it should only be at night. After 6 pm, I believe.
And yes, but I’m not in that season, but the values so far seem about the same.

Yeah, it should only be at night. After 6 pm, I believe.
And yes, but I’m not in that season, but the values so far seem about the same.

Those beetles don't usually have a season…. at least they don't in New Leaf… I usually just make trips to the island after fiddling with the time and spend an hour or two filling my box with them then I sell them at Re-tail.

The island is permanently summer, that’s why

This is true… I also play more during summer which is also a probable factor.

You know what?
I'm gonna bump this with a meme I made while I'm supposed to be in Spanish class: 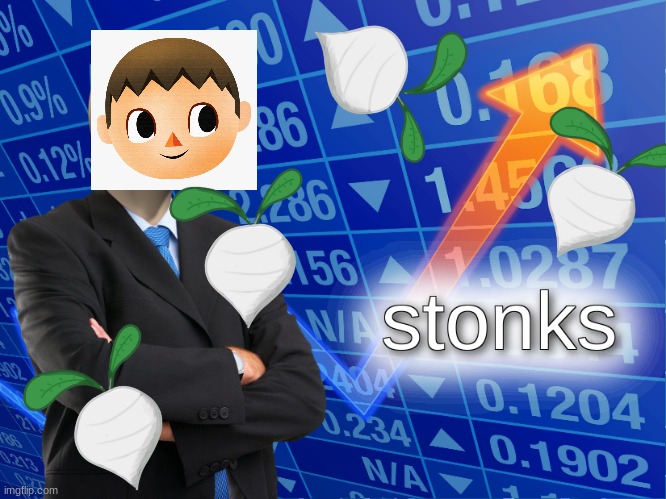 I was able to offload about 60 stacks of stonks for around 560 bells per unit yesterday. I understand the memes now.

Anyone doing cute things with shrubs for Nature Day? I missed out on buying them.

I accidentally joined the slave trade oop
Sold Marina to someone for NMTs
I found Lolly though
And Marshal
And Whitney, Judy, Wolfgang, Kid Cat, and more
I got Lobo from my brother :)