Yknow, just because all the apocalyptic rps I join or make have a habit of dying.
But it's a favorite genre of mine, so here we go again!
Usually I opt for zombie apocalypse settings, but I am also completely open to other suggestions. Maybe another plague, a war, nuclear fallout, etc. We'll determine that when we get there.
I think I'm going to leave this pretty open to people joining or leaving at any time. However, please ask to join. I reserve the right to ask for a writing sample/link to an rp you're in, and I reserve the right to say no if our styles don't work together.
Just a few general rules:

Here is the character template:

And here is some information about zombies and the virus:

Hello! May I join?

I would also like these apocalypse rps to not die. May I?

Yes to both of you!

Cool cool! Is it okay if my character is young? I've got one in mind who's already in an apocalyptic scenario, but he's a child aha

Yes, that's perfectly fine. All ages of characters are welcome, and like I mentioned in the original post, you guys are allowed more than one if you want.

Do either of you have a preference for what kind of apocalypse we're dealing with?

Sounds good! And I don't really have a preference 🥰

Okay! If no one really has an opinion, we can always just do zombie apocalypse. And of course, I'll clarify how the zombie virus works if that's what we decide on.

Sounds good to me! Do we have a character template?

I will make one real quick!

Just put the template on the first post so it's easy to find!

Aight! I'll get that filled out <3

Name/any nicknames: Mordechai Menthi (Mori)
Age: 7
Gender/pronouns: Male, He/Him
Sexuality: Asexual
Personality: He's very quiet; almost eerily so sometimes. At least until he gets to know someone, and then he likes chatting with whoever he's with about anything and everything. He sometimes says strange, cryptic things, and seems to be hiding something. Despite his attempts to seem older than he is, he's very much still just a kid, and tends to cling to older people to feel safer. He's also pretty curious about most things, sometimes to the point of endangering himself.
Appearance: He's about 3'4 with a slender, fragile build, and he weighs around 40 pounds. His hair is black, soft, and fluffy, and it's about medium length. It's also usually a bit unkempt, especially if he ever takes his hat off. He has soft features and he's very pale.
Image: (art by me) 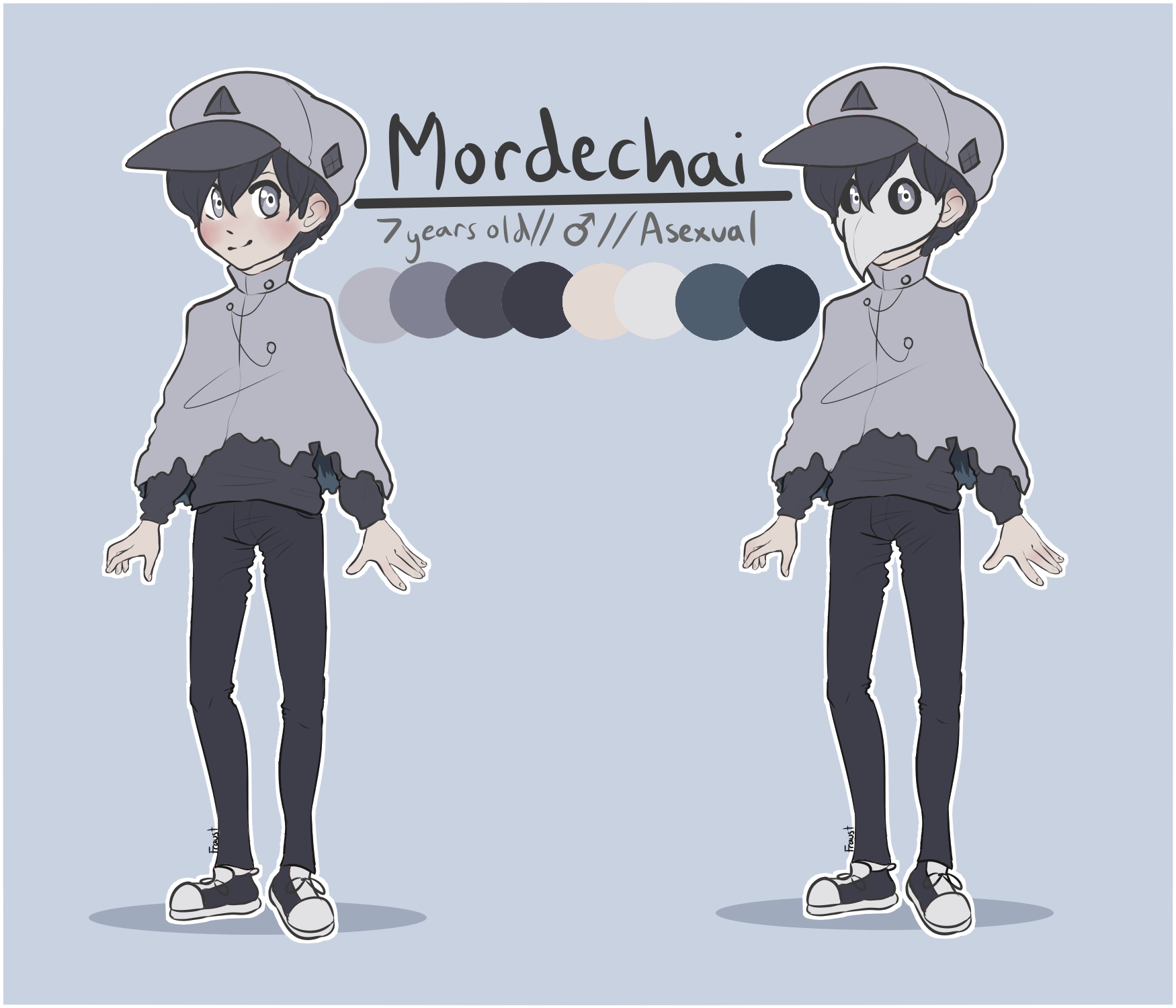 Background: Mori has never known his parents, or at least doesn't think he has. He actually lived with his parents until two years prior to the present time. They were killed in an accident that he inadvertently caused, and he has repressed the memories to the point where he no longer remembers anything from his past other than vague, foggy snippets from time to time. These flashbacks are painful (not physically, but emotionally) and he doesn't like to talk about them.
Outfits: He mostly wears a gray long sleeved shirt with dark pants and shoes with a tattered light gray overcoat of sorts. He always wears a large gray hat which he doesn't remember the origin of, and he sometimes wears a white birdlike mask.
Hobbies/talents: Climbing, Making small contraptions (traps for animals, things to boil water, etc)
Weaknesses: Physically weak, Naive, Can't remember his past
Gear/weapons: Swiss army knife
Open to shipping?: Please don't lol, he's a smol
Other: Doesn't like being touched, Afraid of spiders and being alone.

Name/any nicknames: Tohru Yamakawa (some people use Ru as an affectionate nickname, Yama is a more impersonal nickname)
Age: 22
Gender/pronouns: Cis man, he/him
Sexuality: Gay
Personality: A little cold and gruff at first, can come off as sarcastic and rude, but he's really just a bit anxious when meeting new people. Once shown kindness, he is quick to warm up. He is a very practical person and likes to think through options before making decisions, but he is not overly analytical and believes gut instincts have a lot of value. He is an introvert and has a good amount of creativity and strategy bouncing around in his head. That said, he occasionally has his head in the clouds and misses things. He prefers to make plans before taking action, but is capable of making on-the-fly decisions if absolutely necessary. He's a lot tougher than he seems. Sometimes he gets unexpected rushes out of fighting and bloodshed. This concerns him.
Appearance: Long, straight black hair, usually tied back into a low bun, Thin and angular face shape, well-defined jaw, narrow upturned dark brown eyes, well-groomed eyebrows, very clean-shaven and clearly taken care of, 5'10, light tan complexion with cooler undertones, lean and fit
Background: He was surprisingly quick to abandon his family when everything happened. He opted to try protecting his friends instead, but eventually, the group split and dwindled, and here he is, the last one left. He had to mercy-kill the person he was in love with.
Outfits: he usually wears slimmer-fitting pants and raglan tees, with a preference for a darker color palette. He has a plain black sweatshirt that he uses when it's colder
Hobbies/talents: He's an artist, carries around a little sketchbook. He's a proficient fighter and has a knack for strategy.
Weaknesses: Quick to blame himself, sometimes has trouble forming deep, meaningful relationships with others
Gear/weapons: A switchblade, a revolver and ammo pouch, and a fully-stocked med kit
Open to shipping?: Yes!
Other: Can't think of anything else at the moment

(Can I join? This sounds fun!)

(Yeah, absolutely! And thank you, Fraust!)

(Love your characters guys! I’ll get mine up ASAP!)

(That sounds good! I might add more characters later. Probably won't get the starter up until at least tomorrow bc I've got stuff to do and I'm hanging out with my partner tonight. So y'all have a bit to get characters up. And if you have any questions, lmk.)

(No need to hurry! I have the ACT coming up so I probably won't be super active either)