Templates or no? I honestly find it easier with templates.

Templates, I guess, but please make it! I am no good with that, lmao!

Aliases/Nicknames, if any: Destroyer of Humanity, Traitor of Man, Last of an Age

Appearance: Frail, white-haired man wearing a worn lab coat and white pants (no shoes). The left side of his face and part of his neck are covered by a flexible metal mask integrated into his flesh. The same integrated material covers his left shoulder, where the arm attaches, and many parts of his left side and leg. Many bones have been reinforced by cybernetic machinery and/or liquified alloys, and his eyes are mechanical (left) and cybernetically revitalized (right). 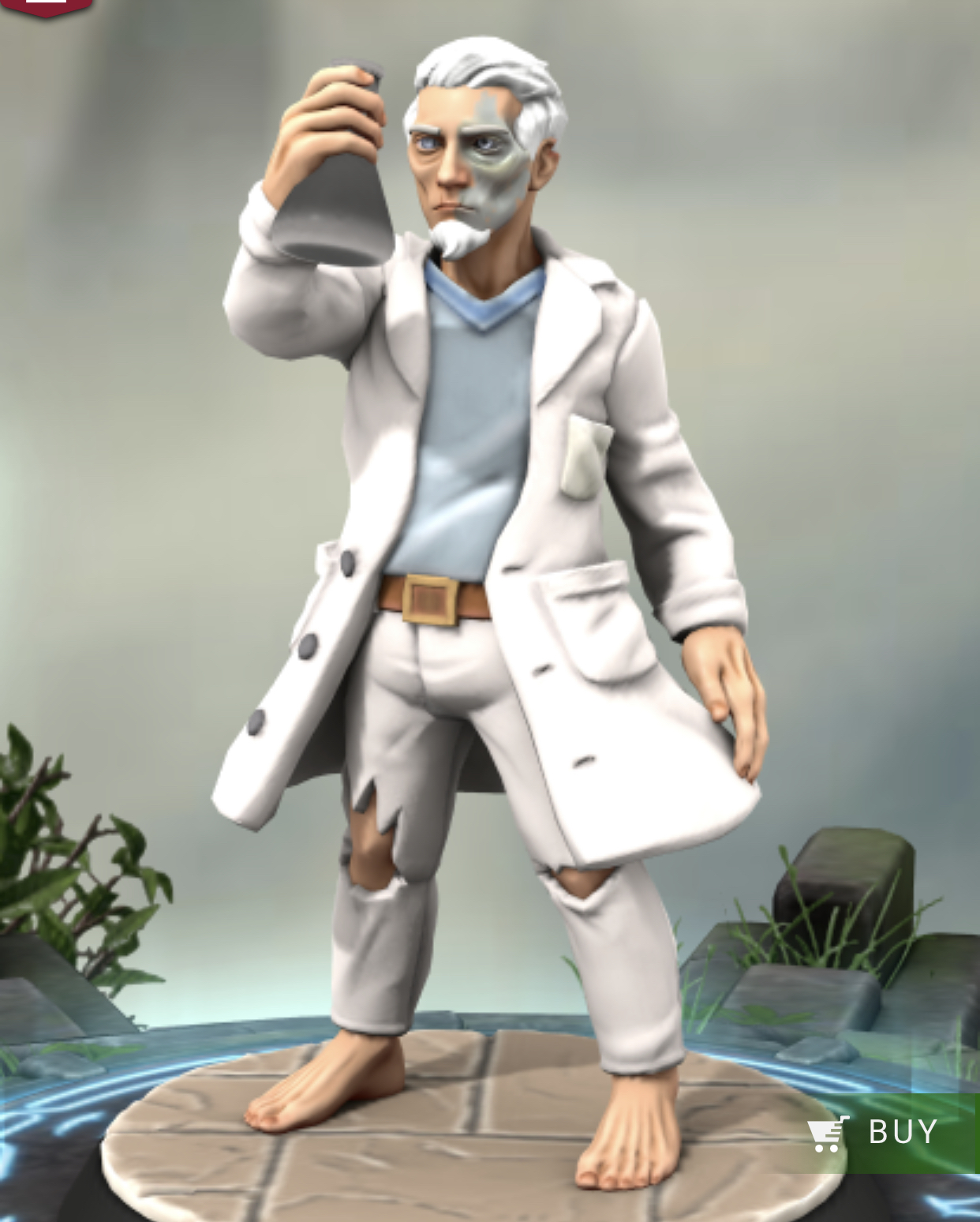 Personality: Genius scientist, condescending and rude, machiavellian, prefers solitude, has grown to hate organic beings, gives no shits about anything except himself, cannot be intimidated except via particularly unique and extreme circumstances, old grouchy bastard that also happens to be extremely resilient

Backstory: Once just a simple scientist, until the explosion that twisted both his body and mind. He declared war against humanity and built an army of machines to take over, eventually setting them all to ‘self-destruct’. He survived the resulting holocaust and built the AIs out of boredom. Afterward, he lived in relative luxury, using science to keep his body from decaying too drastically as he sought different ways to fight boredom.

Notable Powers/Skills: Master Nanotechnologist, Master Mechanist, adept at cybernetics, can build anything from any machines (such as a rocket launcher from a coffeemaker). If given enough time, he can build a machine army to take over, or blow up, an entire planet.

Other: He is just an old man. He is not truly physically enhanced, except in regard to endurance, and has no magical knowledge whatsoever. He usually keeps a stash of tools and guns on him at all times. Curses a lot.

Thank you! (I think it also might bbe important to note that Magnatans tend to make tech go fucky, lol.)

Age: The Eldest, meaning he is made from the electricity created from the beginning of the universe.

Personality: Very electric (Get it? Hah… ha hah… ha ha hah… funny.), and they tend to be very normal one moment then maybe happy the next then maybe destructive the next.

Backstory: They were created at the beggining of the universe, when the first electricity, energy and magnetic enrgy were first being expelled. They created the rest of the Magnatan race.

Notable Powers/Skills: They are a master of all forms of electric magic, and leech any sort of electric power from the surrounding area. This can be turned off, but they tend to make tech go haywire. They can also change their form.

Other: They are ADHD to the extreme, and believe that pretending to be the accounant of a multi-billionaire is the funniest shit on planet earth.

(Oof, lol. Sahl’s going to fuck up Malcolm’s day then. Technology is basically his life. He is very passionate about his nanobots, and he is a cyborg, lmao!)
(And, damn. He’s cool)
(And, just to clarify, in case, basically there are maybe only a few hundred humans left, and they all hate Malcolm. The setting he’s in is post-apocalyptic. And the AI are a race of android scientists I came up with)

(Lol, yes! I live to kinda fuck with other people via characters.)
(Flattered Thank you! I love Malcolm too.)
(Yeah, I figured, lol.)

The first signs that Sahlonek was approaching was that the lights lining the street started turning on, the stores started coming back to life, the cars that had been dead for years finally found the energy to come back again. They enjoyed all of this. But one store was already lit, and that confused them. They walk towards it, temporarily stopping their elctricty from doing anything.

(Lmao!)
(You’re welcome! And thank you!)
(Lol, yeah, it’s probably pretty obvious from Malcolm’s template)
(Also, if we’re keeping to Malcolm’s world [not sure if we are or not], nothing works, cars are wrecks, and most places are abandoned [if you’ve ever played Fallout 4, think that]. Malcolm’s shop would be the exception)

Malcolm was busy fiddling with a project when he saw flashing nearby. He turned, seeing Midas, a rat-sized bot shaped like a spider, approaching. The bot was one of his oldest and dearest creations, and had developed sentience, and a few other abilities, along the way.

Midas flashed again, a blue light appearing in the center of its head. It then moved over to one of the front windows of the old jewelry shop. Malcolm set down his tools and followed the bot, noticing how several things along the street had turned on.

“What the fuck,”he mumbled, his voice raspy with age.

Sahlonek sees Malcolm peer out of his store, and laughs. They turn their electricity back on, steadily making their twoards Malcolm's shop. They realize that the person inside the store wouldn't appreciate their technology blowing up in their face, and chuckles.

They reach the store, and step inside.

Malcolm watched, then pulled out a pistol. He signaled to Midas to rally the others, but Midas flashed at him, a warning, and used its cloaking ability to flee. Malcolm blinked, shocked by the uncharacteristic actions of the little guardian.

The door, which was locked and covered with bars that channeled electricity, swung open. Then, Malcolm’s mechanical eye started to smoke. He grunted, quickly unscrewing it from its place and tossing the ruined thing aside.

With an irritated growl, Malcolm aimed at the intruder, ignoring the pain traveling through a good portion of his body.

Sahlonek phases out all the nearby electronics, including a good portion of this man's body by the looks of it. They laugh at that.

They wave a hand, and electricty pulses through the gun, enough to make Malcolm drop it.

"No need to get violent." they say, a grin implied in their words.

“What the fuck do you want? Get the fuck out of my house!”

Sahlonek waves one vague hand. As they do so, the man collapses.

Malcolm snarled, gritting his teeth in pain. His glare only grew harsher. And with the creature’s words, he had had enough.

Malcolm pulled out another pistol, a smooth and white thing that he had built. He shot Sahl between the eyes, the black and red bullet powerful enough to make a man’s head explode.

Sahlonek sighs, and the bullet passes straight through them. "And I so hoped we would become close friends."

They shake their head, and the gun gets shocked out of Malcolm's hands again.

"You can't kill something like me, you know. Not with that peashooter." they smile.

“I don’t care for friends, and you are intruding in a place where you are most definitely not fucking welcome!”he snapped.

He snorted as the gun flew out of his hand. He simply pulled out another gun, clicked it to a particular setting, and shot Sahlonek again, this time with a black bullet with blue swirls. It would explode in a burst of hot water.

“I’ve got plenty of fucking guns you stupid ass motherfucker.”

They barely notice the dispersal of their form because a moment later, they reform. That gun is shocked from Malcolm's hands as well.

"And I have all the time in the world."

(Never fazed, are ya Serpentess? I'll have to try harder, I suppose.)

Malcolm was even more outraged, but didn’t reach for another gun. He might be pissed off, but he wasn’t stupid. He knew nothing of this invader, and so had little idea on what could possibly hurt it.

“Fuck off! I’ll say whatever I goddamn please. Now get the fuck out. If there’s one thing that fucking pisses me, it’s dumbasses like you. And you seem to be just stupid enough to not realize how protective I am of my own fucking machines,”Malcolm hissed.

A sudden idea came to him and he pulled out another gun. But, instead of shooting Sahlonek, he turned and shot at a small table deeper in the building. It fell over, breaking in half, and a small red light flashed repeatedly on the table’s circular foot.

Malcolm turned back to Sahlonek and casually dropped the gun, a smug grin on his face.

“You’re fucked,”he said with a snicker.

Sahlonek laughs. "Oh, do shut your mouth before I shut it for you. All this empty bluster is giving me a bellyache."

They look curious. "How so?"

He snorted, flipping Sahlonek off.

“That’s how. This’ll get jammed right up your fucking ass until you can taste the steel shavings on my finger.”

Malcolm then burst into a fit of raspy laughter, utterly mocking Sahlonek.

Sahlonek sighs, and an arc of electricity jumps out and grasps Malcom's middle finger, delivering a vicious shock. "Shut up."