Ok so I have no idea if this thread will take off or not, but I came up with this idea for an art game and now I want to try it to see how it goes.
Basically, you draw the character of the person above you. But here's the twist: The only references you're allowed to give are passages from your own writing. So basically, you're drawing the character based on how they are described in their story. You can use as many passages as you like, and all art styles and mediums are allowed in this thread.

I'll start with my character, Andor:

"He’s around six feet tall, and his thick hair is dyed a shade of purple that’s so vibrant it’s impossible to tell what his natural colour might be. You don’t forget a guy who looks like that."

“Let’s say I do try to pull something on you. You call the cops, and they say, ‘so tell me about this guy?’ And you say, ‘His name was Andor Nordmark. He’s six foot two and has purple hair. Also… he had a Norwegian accent, because he comes from Norway. Not Germany.”

ooooh this sounds like such a fun idea!!
I don't know much about Andor but I do know that I love him 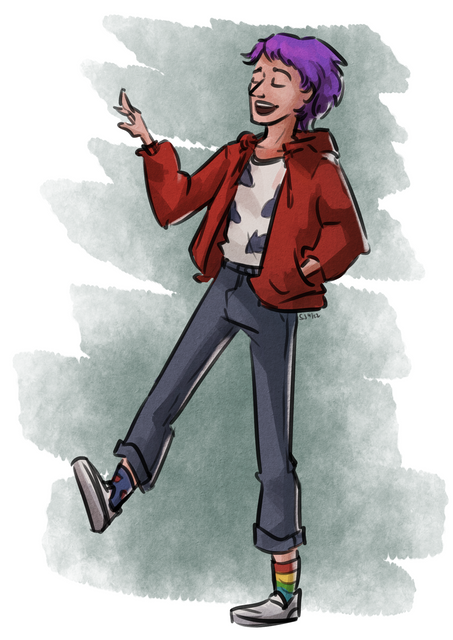 this also made me realise I don't describe my characters nearly enough sldkfjsfjlsdfs
but if someone wants to give it a shot, here's a few scattered lines about Yhioma (the pov character calls her "brat" but that says more about the pov character than Yhioma):

For someone whose existence was apparently an existential threat to the entire political order, the little girl looked almost offensively unremarkable. In fact, the most remarkable thing about her was exactly how little she seemed - Teya was no expert, but the baby fat and the fact that she barely reached Teya's elbow made her look closer to twelve than fourteen. Just a small, average-looking girl with a bounce in her step and exactly no idea about the chaos brewing around her.

"She needs new clothes," Khellis muttered as they watched the brat work on her assignment. Teya frowned and looked closer. Sure enough - the blue tunic had a wide, loose neckline and sleeves that barely reached her forearms. She'd freeze within a few days, where they were headed.
"And shoes," Khellis added with a pitying look at the brat's worn black sandals.

"Those are new," Khellis said to the brat. Teya squinted over, and true enough - chunky beads in yellow, blue, and red now decorated the girl's braids. She'd clearly carved them out of wood scraps and painted them herself, but they didn't look half bad. The bright colours complemented her cool brown skin.

@ninja_violinist oh my god you nailed it!