Role - What is Chasity’s role in your story?

A Pokemon trainer from the Johto region

Other names - What other aliases does Chasity go by?

Gender - What is Chasity’s gender?

Hair Style - How does Chasity style their hair?

Race - What is Chasity’s race?

fingerprint Nature
Talents - What talents does Chasity have?

Hobbies - What hobbies does Chasity have?

Although Chasity understands what is expected of her as a trainer, she tends to prefer being very relaxed when it comes to most of it. While she doesn't have a Pokemon Type preference, she generally likes Pokemon who she sees as cute or pretty. She usually nurtures her primary team, understanding their wants, needs and desires. Chasity loves deeply, and when she sets her mind on something, there's no changing it.

Background - What is Chasity’s background?

Chasity started her journey to become a Pokemon trainer when she was 11, and since then has captured and raised hundreds of Pokemon. She spent lots of time traveling around to find Pokemon she could bond with, though no bond was stronger than the one she had with Terra; her Chikorita. It was only through this quest to find good bonds that brought her to Alola. 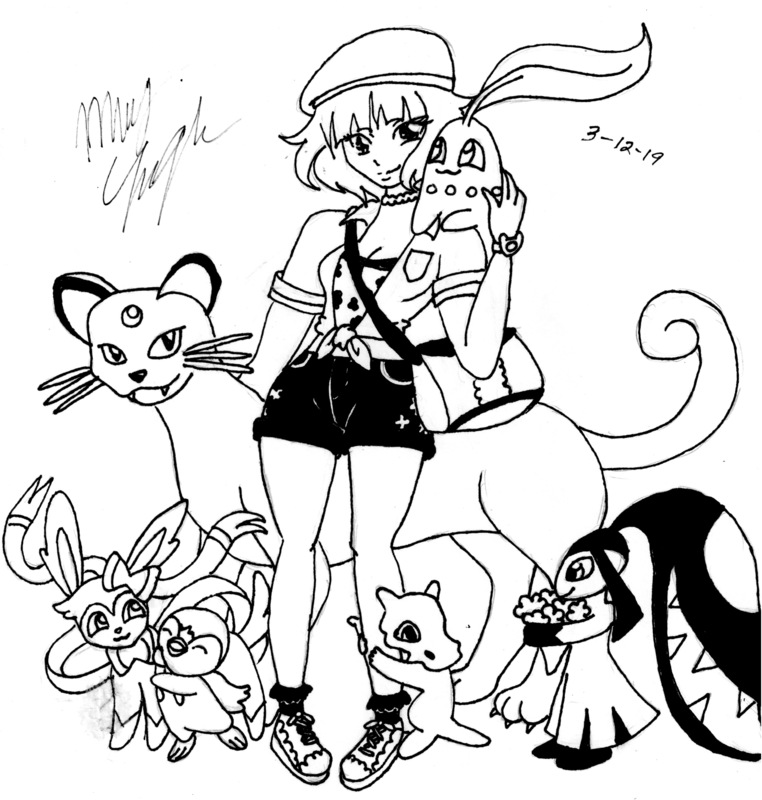 Terra is Chasity's starter Pokemon. Despite being very powerful, Terra refuses to evolve from her Chikorita state.

Leif has been clining to Chasity's leg since he saw her, and basically refuses to let go. Typical of Cubone nature, Leif is very timid, but also has major separation anxiety and often refuses to go into his pokeball.

Dee is soooo happy to meet you! She loves to make friends and is always picking flowers. Many people are intimidated by this Mawile, but she just wants to be friends!

Askel has been with Chasity since he was a Meowth. And since becoming a Persian he's only gotten lazier. While very strong, Askel tends to be somewhat careless. None the less, he's still very cuddly and loving.

Firaki is the newest member of the group, but is none the less happy to be there. She's somewhat surprised at how loving and snuggly the group is, but it suits this Sylveon quite well! While still getting used to battles and having a trainer, Firaki is getting the hang of it.

Kai is a bundle of joy and adventure! This Piplup is not afraid to get down and dirty and is even excited to do so! Kai had left his previous trainer after being abused and pressured into evolving, and after some negotiation, Chasity happily accepted him and let him take his time and do things at his own pace.