Yes, this is an MHA ship. Little background
Hawks went into the hero agency the same time Touya went missing. The same exact day Keigo planned to tell him he loved him. Since then Keigo hasn't kept a serious relationship with anybody. But his last mission he's gone on revealed a villain that had the same blue fire as his old friend. Now Keigo has asked the leader of the l.o.v to be an insider spy for the league. Toumura has even gone as far as giving Keigo a room in the base, and it was right across from dabis.

Can I join? ( I have read all the manga so far so I can't be spoiled)

( yeah you may, and my broke ass hasn't ready any of the mange buttt I've watched all the anime so we should be good, plus I don't mind spoilers )

(Ok, I'll try not to spoil, but I don't watch the anime so I have 0 idea where they are, sorry)

( the base is litterly a couple blocks from u.a in an old bar. I just got creative from there)

( doo if you wanna start you can, usually let my guest start first)

(Ok, do you wanna be Keigo or Touya?)

( id prefer to be Keigo)

Dabi walked out of his room to see Tomura talking to somebody he felt like he recognized. His red wings covered his face, so he couldn't quite see him correctly, but even the wings felt strangely familiar. He went up to Tomura "Who's this… New recruit?" he asked before turning to look at him… wait. That was Keigo. The kid he had a… He shook the thought out of his head. He was "Hawks" as far as hero society knew him… "A hero? Why?" he looked at Tomura with a bitter glare "Tsk, you know what, never mind, I don't have the patience for a response" He walked away from the both of them, a sinking feeling in his gut.

Keigo lowered his wings. He thought the boy looked oddly similar to an old friend. He'd been watching dabi for some time now, taking notes and dates. In his room, hung up on the wall was a corkboard with red yarn strung around a few pegs. Keigo finished talking with toumura, took his jacket, glasses, and boots off at the door. He went to his new room, looking over at the open door next to him. Only to find the same wounded man standing there. His golden eyes rested on dabi for only a moment more before going into his room.

Dabi's mind was racing with a ton of different subjects at once. He knew Keigo was Hawks, but the implications of their interactions never had struck him until now. They were on opposite sides of the chess table, he and this boy, who he had known since childhood. Not only had he known him, they had been best friends. Dabi, once Touya, had actually had quite a… crush on Keigo. They couldn't have that anymore. But now that Keigo was here… maybe there was a chance… No. He huffed in frustration, smoke seeping from his lips. Hawks was still a hero. Even if he pretended to be a double agent, Dabi knew that since they were kids, Keigo would choose the good of hero society over anything. But he couldn't shake the feeling of hope that their friendship might rekindle. He picked at his arm scars for a second before heading to the barfront of the base.

Keigo came out of his room holding a knife. It went to his back pocket when he entered the living room,he stood in front of toumura willingly “ name the job, and ill do it”
Toumura smiled “ first, I want you to go to work tomorrow, get as much information on u.a, work schedule and weaknesses of your closest hero buddy's “ he demanded coldly.

"Kurogiri, do you have any idea why Hawks is in the base" Dabi asked, his sour tone practically curdling his words. Kurogiri stood facing the other direction, cleaning a shot glass, as if he were a real bartender "I do. We believe he might be able to bring us useful information." Kurogiri could sense Dabi's bitterness and added " Do not worry, young Dabi, we will have it under control if a wrong move is made. Though I highly doubt that would happen." Dabi sighed. Kurogiri calm tone was almost always reassuring, though somewhat cold. "I guess if you trust him, trust him too Kuro… cautiously though." He looked to the hall again and saw Tomura speaking to Hawks again. They seemed to be very serious. "And from a distance."

“ I understand. “ Keigo said heading back to his room. While he himself hadn't noticed, shigaraki had picked up quite a few feathers now. The villain came into the main room and threw the feathers away. “ stupid bird.” he mumbled and went back to his room. Keigo stood in the middle of his room, figuring out how he wanted to make it his own. “ the l.e.ds could go around the corners and the wall lines “ he mumbled to himself 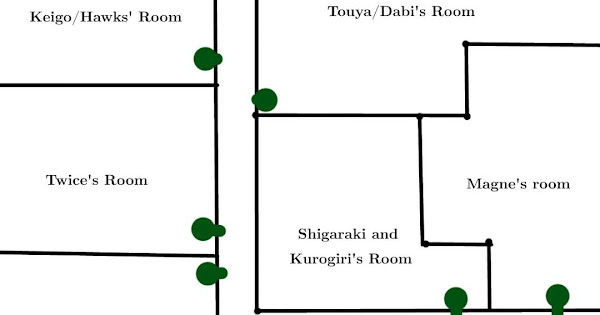 I made a map of what I think the base looks like, so we can be on the same page. If you don't like it, I can edit it or make another one. I think it'll be easier to describe this way if we have a map.

Dabi looked at Tomura as he walked away "Hey" he called "Are you absolutely sure we can trust the bird?" Tomura scowled walking to his room "I don't like that your implying I can't do my job right. I assure you I know what I'm doing" and, in his usual man-child fashion, he slammed the door to his room. Dabi rolled his eyes. He was just hoping Keigo didn't recognize him. That would be bad news for everybody involved.

Keigo, as weird as it sounds, was stretching. One of the many things he does when he can't fly. The colder weather causes his wings to lock up, so he's usually on groundwork during the winter. Which means a lot of layoff time. Heroes that could fly all year round were in large demand during winter and endeavor only used the heroes that made him the most money when time came. So hawks was a seasonal hero and he had a feeling that this is what made him so popular at times. Though right about now the birdy was doing a one-handed handstand in front of his open door. Something Touya taught him to do a long time ago.